"John Scully's" comic strip that has a farewell every day (drawn and written by Ruben Bolling)
September 19 is the last post for this blog. Thanks to all my readers! 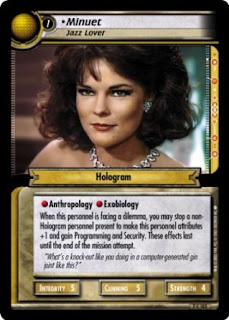 Notes from the birthday list.
1. The Picture Slot. Previous Picture Slotters were Adam West and Kathie Brown, and this year's winner is Carolyn McCormick as Minuet, a character that proved the old phrase "Riker will chase anything in a skirt with a pulse" gave him way too much credit, since she was just a holodeck character.

2. Spot the Canadian! Kevin Zegers has the kind of career the Canadian government hoped they would be able to produce when they required a quota of Canadian born on the shows produced in their country.

3. Nepotism FTW. Lydia Hearst is the daughter of Patty Hearst.

Many happy returns to all the living on the list and to the dead, thanks for all the memories.

The Weekly Soapbox: The Swan Song

This will be the last post on this blog. I have enjoyed myself for the past thirty three months putting the lists and predictions together and making my little comments, but my interest has been waning for some time now. I had hoped to make it through the end of the year or at least to make a month long tribute to Back to the Future II, but I just can't find the time right now. I'm teaching more classes than I have for a while, which is very good for my bank account, but a little bit of a challenge in terms of time management. Not doing the blog will save me about an hour a day in research and writing.

I want to thank all the people who read the blog over the past few years and especially those who took the time to leave comments. We all know the standard Internet warning "Don't read the comments!", but in the successful blogs I've written, the main reason I continued them was because I wanted to read what my commenters would have to say. You guys (and gals) have been great.

I also enjoyed learning new things in my research, like today when I read that Patty Hearst's daughter is a supermodel (who knew?), but as much as I enjoy a good Fun Fact to Know and Tell, time constraints mean our little party is coming to an end.

Wishing all my readers safe and happy journeys... IN THE FUTURE!
Posted by Prof. Hubbard at 9:42 AM

Traveler! Have you news... FROM THE FUTURE?